Everyone loves the Jurassic Park series. Over the years, the dinosaur world that has been so realistically portrayed on screen, has managed to awe, scare and cheer millions of people worldwide.

The franchise celebrated its 25th anniversary last year. Through all these years, Kauai has been a consistent filming location for the series. The main reasons being the raw, undisturbed beauty of the island and the supportive infrastructure for filming.

As Patrick Crowley, one of the producers of Jurassic World, stated in an interview, they needed a green location to shoot the jungle portion and considering the infrastructure, it made a lot of sense to shoot the film in Kauai.

To celebrate the successful stint of one of our favourite movie franchises and to honor the grandeur of our island, we will be covering the 5 must-see Jurassic Park filming locations in Kauai in this blog post.

This will serve as a guide for your next Kauai visit and help you see those locations for real, without the dinosaurs of course.

1. The Amber Mine at Ho’opi’i Falls (Kapaa, East Kauai)

This location claims an important place in the storyline as this is where it all begins. In the first Jurassic Park movie, the Ho’opi’i falls area is shown as the Mano De Dios Amber Mine in Dominican Republic.

This is where Hammond’s team discovers a mosquito enclosed in amber whose DNA is later used for populating the Jurassic park with dinosaurs. Although the falls are not gushing in full splendor in the movie, they are much more beautiful in real and can be reached via a short hike through the scenic Ho’opi’i Falls Trail.

A National Tropical Botanical Garden in Kauai, Allerton Garden is well known for the hundreds of varieties of tropical plant life that are thriving here, amidst some ingenious and commendable landscape architecture.

The garden is also famous for the ‘Moreton Bay Figs’, commonly known as ‘The Jurassic Park Tree.’ These giant trees were featured in the 1993 Jurassic Park movie in the scene where Dr.Grant and the children discover the Raptor egg.

To this day, people, especially children, flock to the Allerton garden, with Jurassic Park T-Shirts on, to have a look at those trees and relive one of their favourite Jurassic Park moments.

Guided Tours of the Allerton Garden are available with prior reservation. 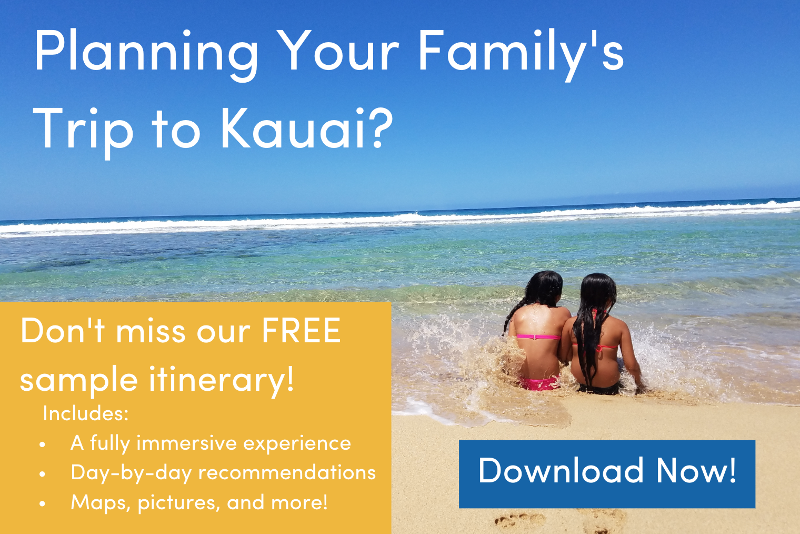 The 2800 acre wide ranch located in Kilauea, on the north-eastern shore of Kauai, has been featured in three Jurassic Park films, including the 2015 “Jurassic World.” The vast, expansive grassland, served as the perfect location to introduce the dinosaurs in the movie.

The scene in the first installment when Dr Grant and Ellie are absolutely mesmerized when they see a giant Brachiosaurus, is etched forever in the hearts of Jurassic Park Lovers.

In the 1993 movie, remember the scene when the visitors first arrive on the island as the nostalgic Jurassic Park music runs in the background?

The waterfall in the background when the helicopter lands on the helipad is the Manawaiopuna Falls, colloquially known as Jurassic Park Falls.

As seen in the movie, the waterfall is deeply embedded inside the jungles of Hanapepe valley. The only access to the falls is via helicopter as the area is privately owned.

In the Lost World, when the team approaches Isla Sorna via a vessel, we couldn’t help but awe at the magnitude of the magnificent Napali Coast. The towering cliffs that kiss the ocean and disappear deep into the lush Napali valley seemed as the perfect location to portray the fictional dinosaur island and blow the audience away.

It was the Honopu Valley that was featured in ‘The Lost World’, The Napali Coast was also used for filming the 1993 Jurassic Park and the 2015 Jurassic World movies.

While some may choose to see this iconic coastline from the air, we think the only way to feel immersed in it is to see it by boat. But this decision can be difficult with so many different boat tour operators offering their services.

Our advantage is that we (Makana Charters) are native Hawaiian owned tour operators, offering closest Port to Coast travel in ideal sized boats to navigate the depths of the Napali coast.

We will be honoured to have you onboard and to take you through what we humbly consider Kauai’s best Na Pali Coast tour.

Well, there you go. These are the 5 Jurassic park filming locations that deserve a place in your Kauai travel itinerary. Explore the locations and do not forget to share your favorite Jurassic Park Fan moments with us.