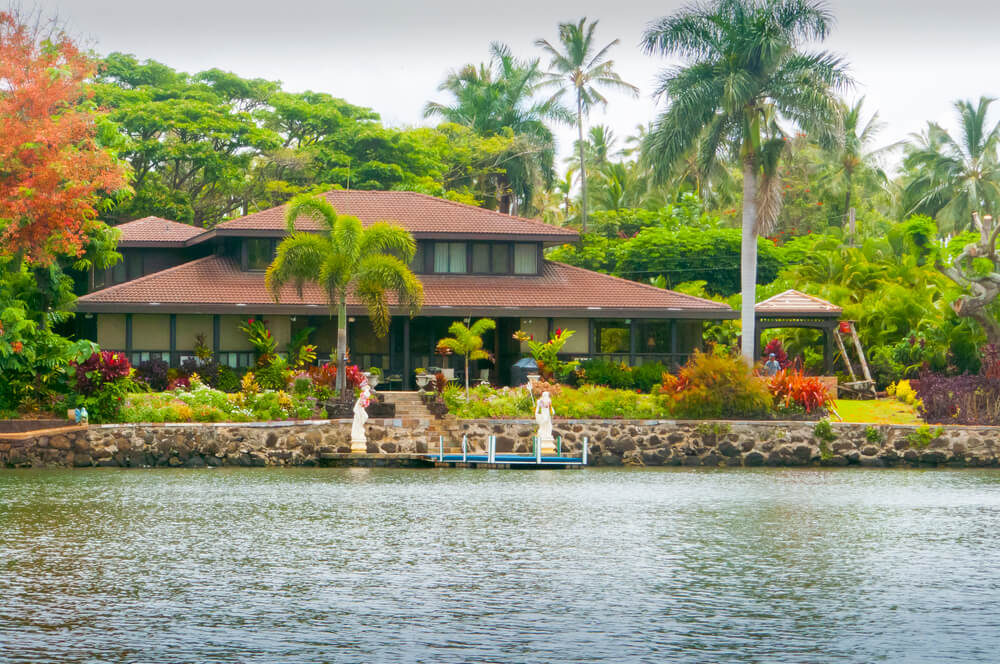 Kauai, the oldest Hawaiian island, boasts of its prized possessions such as “Mount Waialeale – The wettest place on Earth” and “The Kalalau Trail- One of the Deadliest Hikes on Earth”. These best in world sites highlight Kauai on the world map.

Another site that makes Kauai known world over is the Wailua River. The only navigable rivers in all of Hawaii are in Kauai. Stretching 20 miles, Wailua River is the largest of all. The sacred Wailua valley or the Wailua Complex is designated as a National Historic Landmark.

Wailua River originates at an elevation of over 5000ft above sea level, on Mount Waialeale, located at the heart of Kauai. It is mainly formed by the confluence of its North and South forks. Several small streams join together to form the Wailua River, which then flows into the ocean at Wailua Bay, near the town of Wailua.

The South fork of Wailua River gradually plunges down 80 feet as Wailua Falls, the two-tiered waterfall that was featured in the opening credits of the TV show “Fantasy Island”.

The Opaekaa stream, after dropping 150ft as Opaekaa Falls, eventually join the Wailua River. The Opaekaa stream gets its name from the rolling Shrimp that were once found in abundance in the stream.

The Wailua area was called the land of the Ali’i, who were the ruling class of Hawaii between the 13th and 18th centuries. It is said that King Kaumualii, the last king of Kauai, preferred to reside in the Wailua River Area. Ancient rulers of Kauai placed special emphasis on the Wailua River Area for its large fertile banks and ease of navigation. This was an area of cultural and economic importance to them. The presence of seven sacred heiaus, from the river mouth near Lydgate State Park to its origin point on Mount Waialeale, indicates the spiritual significance of the site.

Numerous prehistoric rock carvings can be found at the mouth of the Wailua River. The Wailua Complex of Heiaus contains sites which include remains of ancient structures like places of refuge, places of worship and birthing stones. It is said that the birthing stone was the place where kings were born. The Hikinaakala (rising of the sun) heiau in Wailua River mouth adjacent to Lydgate Park, Mana Heiau, Holoholoku Heiau, and Poliahu Heiau are some important sites in the area.

Kayaking Wailua River is a very popular activity in Kauai. You can either rent a kayak and explore the territory on your own or take a guided kayak tour. Whatever mode you choose, the kayaks usually run full and its best to make your reservation a week prior to your trip. A guided tour offers an informative experience and also saves you from straying away into unknown territory.

While kayaking the placid warm waters amidst the lush green jungle of Wailua is a pleasurable experience on its own, the adventure doesn’t end there. Kayaking Wailua River also gives you access to the Kamokila Village, Fern Grotto and the famous hike to Secret Falls.

You can either rent a kayak from a rental at the beginning of the river or head over to Kamokila Village and start your expedition from there. The Kamokila Village is a recreation of an ancient Hawaiian village, with an ambiance that resembles the thousand-year-old lifestyle. Visitors get to see the ancient sculptures, explore the Mango and Banana plantations and take a tour of nearby locations on an outrigger canoe.

The one-way kayak trip to secret falls ends with a joyful bath under the Uluwehi Falls. It’s roughly a 45-minute kayak from the river mouth followed by a 20-minute hike through a rainforest. Contrary to its name, secret falls is no more a secret as it frequently gets visitors.

Another popular kayaking destination in the area is Fern Grotto. It is a secluded lava rock cave with a fern growth on its exterior. This feature gives the cave a unique appearance. It is located 2 miles up Wailua River and is recognized as a romantic getaway for couples. Fern Grotto has also been the location for many weddings.

If you prefer a laid back experience, and kayaking the two-mile distance seems too daunting, take a Wailua River cruise. The guided tour combined with songs and entertainment might be just what you need to experience the breathtaking scenery.

Immersing yourself in one of the most scenic and revered locations on Kauai feels like an unforgettable experience. The journey will provide you with plenty of photo opportunities. After an exciting expedition, you will return home with the credit of having coursed through the largest navigable river on Kauai.

Article Name
Wailua River - The Largest Navigable River of Kauai
Description
Kauai, the oldest Hawaiian island, boasts of its prized possessions such as "Mount Waialeale - The wettest place on Earth" and "The Kalalau Trail- One of the Deadliest Hikes on Earth". These best in world sites highlight Kauai on the world map. Another site that makes Kauai known world over is the Wailua River. The only navigable rivers in all of Hawaii are in Kauai. Stretching 20 miles, Wailua River is the largest of all. The sacred Wailua valley or the Wailua Complex is designated as a National Historic Landmark.
Author
Makana Charters
Publisher Name
Makana Charters
Publisher Logo