Kauai’s West side is a place where most visitors don’t spend much time other than the usual tracks – Polihale, Waimea Canyon/Kokee, and cruising the Na Pali Coast.  Having grown up here for generations, we at Makana Charters want our guests to get the most out of their visit to our sunny side of the island.

You may have heard stories or mention of the Menehune – a mythical race of small people rumored to live on the island before colonization.  There are strong opinions on both sides of the argument as to whether or not they did (or I should say do) exist.

But one place leaves clues that ignite questions about the subject.  It provides evidence that this small tribe even had a hand in irrigating the farms alongside the Waimea river.

The “Menehune Ditch” would be easy to pass by if there weren’t a sign pointing to it and a swinging bridge next door.  The road to take it is the same one as our check-in office on Alawai Rd, which eventually feeds into Menehune Rd.  As you are crossing the river bridge getting into waimea, you’ll see our office right on the corner.  You take that road all the way until the pavement ends, where you will see the swinging bridge.  On the post of the bridge is a sign pointing across the road to the Menehune Ditch. 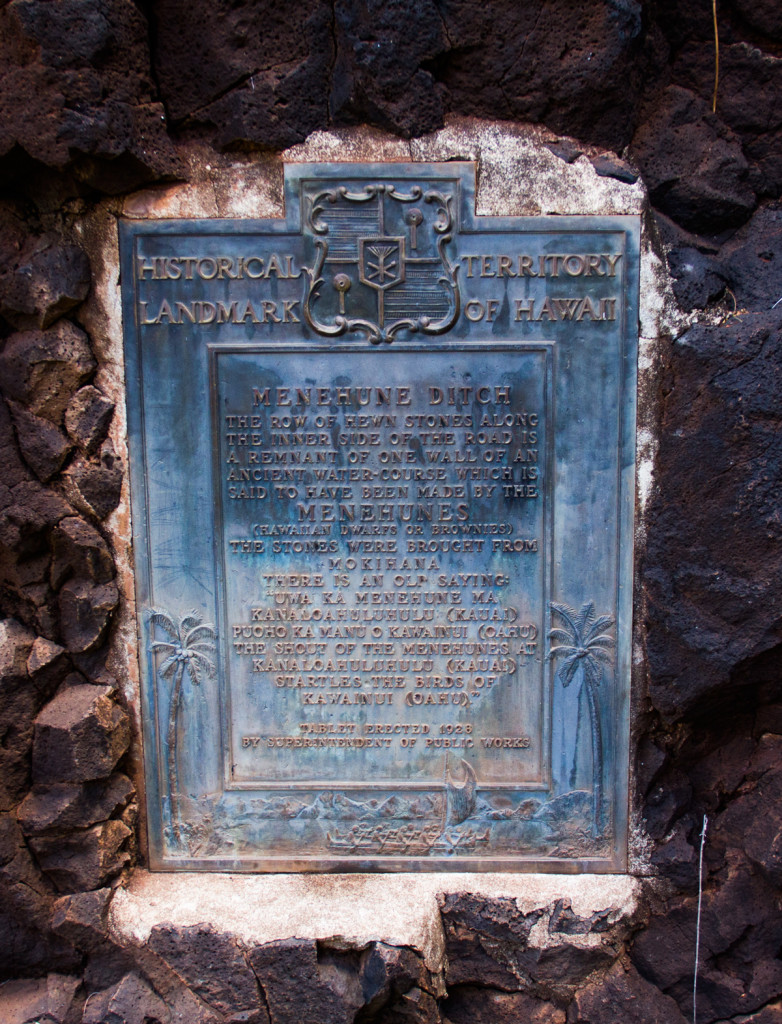 The commerative plaque at the site of the Menehune Ditch

You might feel a bit underwhelmed by this attraction, which is fair enough – it’s hard to compete with the stunning vistas of Waimea Canyon, The Napali Coast, and all our gorgeous beaches.  But the attraction here is more for the curios mind than a treat for the eyes.  What you will see is a stone wall that looks very old, carrying water between itself and the cliff it runs parallel to. It looks similar to arrigation tactic to divert water to farms – innocent enough, right?  But then you see where the ditch leads:  A tunnel that is so small that even crawling through it would be tight.  It looks like an ancient stone form of the metal culverts we use today.

Who could build this small tunnel?  Tools of ancient Kauai were not advanced enough to drill that far into the rock – and the walls appear as though the walls were carved out by hand. This tunnel is only 2-3 feet high

Either way, it’s a fun way to spark curiosity and trying to get people to solve a mystery.  A plaque at the site gives more information.  Kids also love the swinging bridge that crosses the river and horse-watching from the bridge. A horse grazing by the river near the Menehune ditch

IF you are coming on a Napali Coast tour with us, checking out the Menehune ditch is an easy detour, and a quiet one at that.  Keep in mind that you drive through a neighborhood on the way so please drive with care and respect.